Sweetwave Audio Inc. is a proud dealer of the entire Grace Design product line. Our team is dedicated to providing our customers with the first-rate service for the best price. We are not a big box store, so our staff can focus on working directly with each client to fulfill their individual needs.

In 1990, Michael Grace began building single order custom audio products for a small, devout following of recording engineers and artists. Before long, the word had spread about these custom microphone preamplifier designs, which were said to outperform anything else that was commercially available.

Over the years, Grace Design has maintained a steady, methodical pace to developing new products and technologies. Our product line has evolved into a definitive collection of microphone preamplifiers, monitor controllers, and other unique hardware. We pride ourselves on providing audio professionals and enthusiasts with some of the finest tools imaginable. As our company grows, we continually strive to improve our production methods to make sure they are exact, efficient and environmentally sound. Our employees are treated like family and we strive to maintain our business relationships as friendships. And above all, we remain driven by the original passions that founded the company- the love of music and the art of recording it. 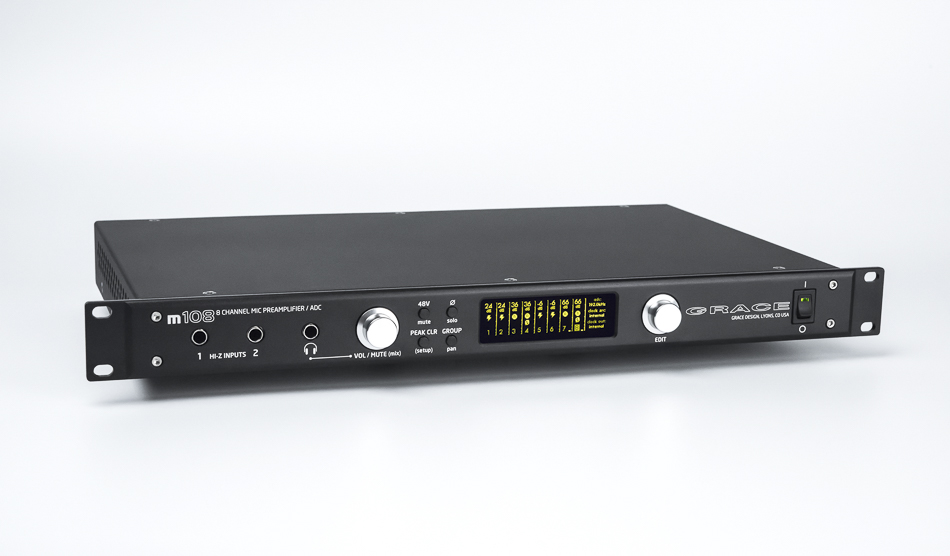 The finest sounding, most capable mic preamplifier we have ever created

Based on the acclaimed success of our m802 remote-controlled mic preamplifier, the m108 distills the best of these achievements into a sleek, elegant 1U chassis design. Our transformerless, transimpedance mic preamp design is unmatched in its ability to effortlessly resolve complex sonic waveforms, resulting in recordings of amazing clarity and depth. Integrated A/D conversion delivers digital signals to the workstation that are pure and beautiful. Latest generation s-Lock PLL ensures pristine, jitter-free sample clock when clocking from external word clock or Dante clock. And an asynchronous mode USB interface provides the best possible jitter performance when connected to a computer.

Out of the box, the m108 is ready to go as a stand-alone mic preamp / ADC. With integrated serial or MIDI control, the m108 can be configured in large channel-count remote systems, with control from our existing m802 hardware remote control unit, from Protools, the forthcoming m108 control app, or even simply over Ethernet with any modern web browser. And an optional DANTE interface is provided for network audio configurations. The m108 control protocol is backward compatible with the m802 so you can add m108’s to an existing m802 system.

The m108 Control Software application allows for control of up to 12 m108 preamplifiers using the Ethernet control port on the m108. Each preamplifier in the system will have a dedicated control panel for operating the microphone preamplifiers, ADC, and clocking parameters. The control application allows for the creation of channel groups as well as saving and recalling presets. The application runs under Windows (7,8.1,10) and Mac OS (10.11). For control of the m108 via Android or iOS use the m108 web interface.