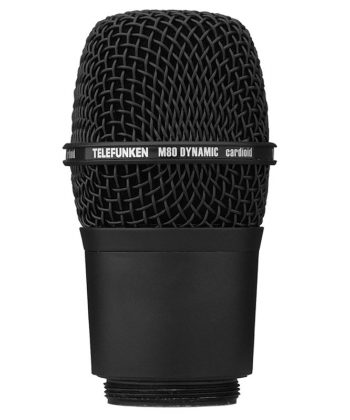 The TELEFUNKEN Elektroakustik M80 Dynamic microphone has rapidly become a new standard for live performance and stage use. The microphone features a low-mass capsule built with a super thin Mylar membrane that is coupled with our propriety step-up transformer to give superior clarity and extended high frequency response (which in many ways is similar to what one might expect from a condenser microphone), in a rugged design meant for daily abuse in touring applications.

The M80 Wireless Head is now available in two models (each in either CHROME or BLACK finish). The M80-WH is based on the SHURE brand wireless products.

In 2008 a band called Green Day tried the M80 and found they liked the tone of the microphone in various applications, but especially on vocals. The only fly in the ointment was that Green Day isn't a club band, they're an internationally prominent act that regularly sells out arena and stadium venues, which in this day and age means that a wired vocal microphone is out of the question.

After giving the modified Shure® mics a try, more than 40 wireless modifications were ordered by Green Day as they embarked on a world tour. From this success "team TELEFUNKEN" developed a standard modification process for Shure® microphones.

This is an entire M-80 (capsule, head grill, output transformer), neatly packed in a much shorter body with the screw on terminal connections. The result is a whole lot of microphone crammed in a little tiny space that provides 10 pounds of sound in a 6 oz package.