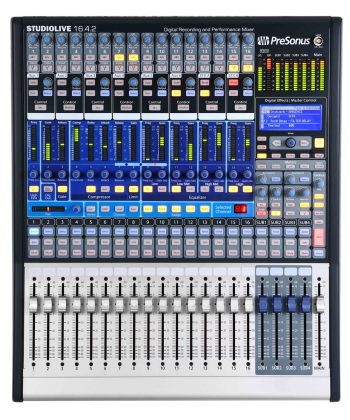 More Than a Mixer—a Complete System

You'll never go back to an old-skool analog mixer once you've used StudioLive™. With its incredible signal-processing power on every channel, easy store and recall of every setting, and the ability to record it all with just two mouse clicks, you'll get spoiled fast! Easier to use, better sounding, and flawlessly integrated with state-of-the-art software, it delivers the most creative environment possible for both live performance and studio music production.

But StudioLive is not simply a mixer, it's a rapidly growing family of state-of-the-art, integrated hardware-software mixing and recording systems that deliver the features you need for live sound, live recording, and studio recording.

The StudioLive 16.4.2 is a great choice for those who want to mix smaller shows and worship services, and it's a great choice for small club systems, portable churches, small bands, corporate applications, educational institutions, and anywhere you want a rack-mount mixer. It's the perfect hardware core for a project studio.

Or daisy-chain two StudioLive 16.4.2s to form a 32x4x2 performance and recording console for mid-sized shows and events.

Yet despite its many controls and features, it's compact, rack-mountable, and easy to transport.

Build live mixes that glisten with clarity and detail—then record and enhance the performance with the power of StudioLive 16.4.2. Get creative in the studio. Build mixes, loops, sound effects, and more, then bring them out to your show and mix them with the live performance. Process channels using your favorite plug-ins and completely automate your entire performance.

Control Your Sound Your Way!

With a PreSonus StudioLive-series digital mixer, you not only get high-end sound and tremendous processing, mixing, and recording power, you can control all of this sonic might from virtually anywhere. Want to touch your mix with the physical feedback of real faders and rotary knobs and an intuitive, analog-like user interface? The StudioLive delivers big time; sound people who have only mixed with analog boards quickly become comfortable working with a StudioLive.

Despite its analog-like mixing surface, this is very much a digital console, and it offers features no analog mixer—and very few digital boards—can match. For example, the ability to control the StudioLive mixer from a laptop adds tremendous flexibility and convenience—and with the bundled Virtual StudioLive bidirectional control/editor/librarian software, you get it all for free.

Written exclusively for StudioLive mixers, Virtual StudioLive (VSL) provides a complete visual representation of the mixer, allowing you to control the features with a mouse, trackpad, or trackball on a FireWire-equipped Mac® or PC. Add third-party VPN software, and you can even control StudioLive mixers over the Internet—ideal for contractors. To get a competing mixer with computer control even close to this complete, you'd have to pay several times as much.

You’re mixing a live show with an old-skool mixer—make that any mixer other than StudioLive—and you need to check the sound underneath the balcony—or in the balcony, for that matter. Or you’re sound-checking and want to hear the stage monitors for yourself. If you can’t leave the mixing station, you have to rely on someone else’s ears. If you don’t have a reliable crew, you don’t have a chance.

You can say goodbye to that problem if you use a 16.4.2 and an Apple iPad®! With StudioLive Remote for iPad—available free from the Apple App Store—you have complete, real-time, wireless remote control over Virtual StudioLive, which in turn offers real-time control over the StudioLive mixer. As long as you have a wireless connection between your iPad and computer (and are connected via FireWire to the 16.4.2), you are in control of the console. StudioLive Remote is easy to use, provides control of almost every feature of the StudioLive, and looks and feels like an iPad app should.

Yet even better: control of monitor mixes from iPhones and iPod touches!

We've given you a lot of sonic control with the StudioLive, Virtual StudioLive, and StudioLive Remote. It's only fair that we help you give the band control of their sound, too. With PreSonus' free QMix™, each band member can control their own StudioLive aux (monitor) mix from an iPhone® or iPod® touch. QMix lets you adjust a single aux mix per iPhone. Select inputs and levels for your custom monitor mix, and then use the Wheel of Me to get, well… “more me”… quickly during performances.

You can even set permissions to ensure that the bass player, always the practical joker, can't mess with the hot-tempered lead singer's monitor mix. Otherwise, that bass player is going to get in trouble someday. We're just sayin'….

A gigantic console in a small package thanks to the Fat Channel.

If StudioLive 16.4.2 were an analog console, it would have 4-foot-long channel strips packed with knobs and buttons or it would require a massive outboard rack of expensive signal processors! That's because each channel has its own compressor, limiter, gate, 4-band semi-parametric equalizer, and high-pass filter. In all, we've packed 31 compressors, 31 limiters, 31 gates, 16 high-pass filters, and more, into one remarkable Fat Channel.

Not just effects. Effects you'd expect from a $600 stand-alone processor.

You get two programmable, 32-bit, stereo DSP effects engines, loaded with 50 reverbs, delays, and time-based effects that you can really use. The reverbs are so rich and detailed that you feel like you're there. Delays are precise. Slap echo sounds like old-school tape effects.

The reverbs are so rich and detailed that you feel like you’re there. Delays are precise. Slap echo sounds like old-skool tape effects. All 50 effects have easy-to-use parameter adjustment, tap tempo, and store and recall selection for the ultimate in creative flexibility.

The StudioLive 16.4.2's 4 dual, 31-band graphic equalizers can be applied to the main, subgroup, and aux outputs so you can compensate for room acoustics, speaker response, and much more.

Get your loudspeakers to play nicer with the room they're in — all without having a degree in acoustical engineering.