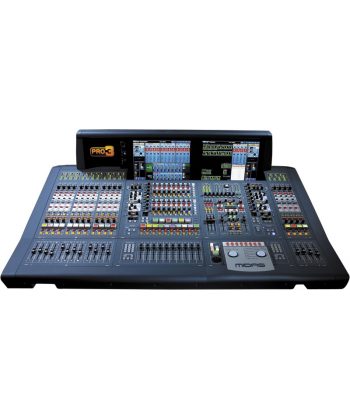 Features and Benefits of the Midas PRO3-CC-TP

The Midas PRO Series has become established as the industry standard on live concert tours and the road-proven PRO3 featuring 56 simultaneous input channels and 27 time-aligned and phase-coherent mix buses, shares the familiarity of a common user interface and workflow with PRO6 and PRO9. Like all PRO Series consoles, the PRO3 features managed latency and 40 bit floating point processing precision. PRO3 sets the standard of performance in high-profile live sound applications and is a truly impressive digital control surface for the engineer whose very livelihood depends on both unparalleled functionality and reliability.

HyperMAC and AES50 audio networking technologies allow the PRO3 to dynamically assign up to 288 inputs and 294 outputs at 96 kHz sampling rate to any of its input channels and bus outputs on a scene-by-scene basis. This high level of connectivity, coupled with the large channel and bus counts, makes the PRO3 equally at home in theatres and symphony halls as it is in live concert touring, outside broadcast and music festivals.

The Midas PRO 3 Live Audio System provides entry to the PRO Series of consoles and will ensure that even more touring riders and professional installations can take advantage of Midas’ digital features.

PRO3 naturally features the legendary and much-loved Midas sound characteristics, which have their roots in the classic Midas analogue consoles. It also includes the overwhelmingly successful VCA and POPulation groups, which allow users to navigate channels intuitively, without the hindrance of layers or pages of faders. It also benefits from the same comprehensive choice of effects and dynamics processing as the PRO6 and XL8, including the much-acclaimed XL8 compressor styles.

The PRO3 brings these features and more within reach of tighter budgets, offering 48 input channels with remote controlled mic pres, 27 buses and six stereo effects. At the heart of the PRO 3 is another new arrival from Midas, the DL251 fixed format, 5U I/O rack, designed as a more cost-effective solution for those not requiring the flexibility of Midas modular I/O hardware. However should investors require more connectivity over time, a simple and affordable upgrade path supersizes the system to the PRO6 or the fully-loaded, 88-channel PRO9 with additional hardware and firmware upgrades.

There are no related products at this time.