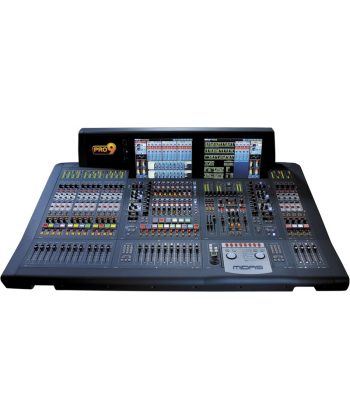 The Midas PRO9 sits at the top of the Midas PRO Series, featuring a massive 88 channel input count and 35 buses, with the dual stage boxes offering placement flexibility up to 200m apart and 500m from the FOH position.

The Midas PRO9 comes complete with the features that have been made popular by established Midas digital systems, the XL8 and the PRO6. This includes the hugely successful VCA and POPulation groups, which allow users to navigate channels intuitively, without the confusion caused by layers or pages of faders. It features the legendary and much-loved Midas sound characteristics, which have their roots in the classic Midas analogue consoles. The PRO 9 also benefits from the same comprehensive choice of effects and dynamics processing as the PRO6 and XL8, including the acclaimed XL8 compressor styles. Expandable modular connectivity means the system can be upgraded to meet any applications.