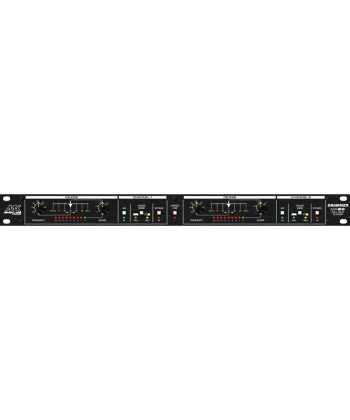 The human voice is one of the most diverse signals ever encountered by engineers because it contains such large variations in level and harmonic structure. Getting the desired vocal sound can sometimes prove difficult. Setting the E.Q. to give the vocal sufficient 'definition' and 'cut' in the mix can cause large sibilant peaks which often lead to severe distortion. The Drawmer MX50Pro 'Vocal' De-Esser solves these problems quickly and efficiently by reducing the level of the sibilant sounds whilst leaving the remainder of the signal unchanged.

The MX50 is a flexible, simple to set up dual De-Esser designed to fulfil the needs of the Recording Studio, Broadcast, Theatre and Live Sound Industries. Its classic application is to overcome the problems that can arise when sibilant sounds (S's and T's) are over-emphasised by the human voice, with such other applications as 'smoothing' a stereo mix, reducing string noise on acoustic guitars or breath noise on flutes, even refining cymbal and hi-hat sounds. Processing is achieved by adjusting just two control parameters, Frequency and De-Ess. The fully variable Frequency control operates from 800Hz to 8KHz encompassing the full sibilant range, including 'hard' sounding harmonics and other side-effects which can be generated when treble frequencies are boosted or enhanced. This is followed by the variable De-Ess which acts as a 'more' control giving up to 20dB of gain reduction at the selected frequency.

The MX50 has two modes of operation:

Split Band de-essing: Recommended for the majority of applications, this mode splits the audio spectrum into two bands with the split point being dictated by the position of the Frequency control. Only frequencies above the split point are attenuated.Full Band de-essing: A useful alternative where unobtrusive minimal processing is required. This mode reduces the total signal level in response to sibilant peaks in the selected frequency band.