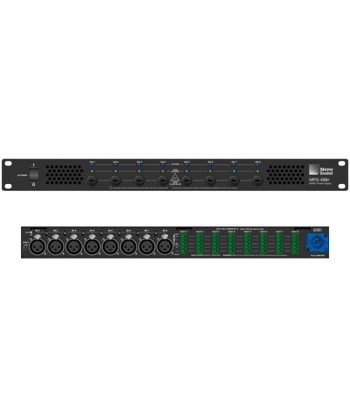 The MPS Power Supplies are the required method of powering MM-4XP loudspeaker systems. The MPS-488 rackmount 8-channel power supply is ideal for larger installations with multiple loudspeakers, while the compact MPS-481 is designed for powering single loudspeakers individually.

The MPS Power Supplies can deliver DC power to MM-4XP loudspeakers (one per channel) at cable lengths of up to 300 feet with just 1 dB of loss in peak SPL using 18 AWG wire. The use of composite multiconductor cables (such as Belden 1502) allows a single cable to carry both audio and DC power from the MPS Power Supply channel to the loudspeaker. Longer cable lengths are possible for moderate applications that don't drive the loudspeakers to maximum output, as well as for installations with heavier wire gauges.

Amplifier and signal processing circuits for the MM-4XP are designed to tolerate voltage drops of up to 30 percent, thereby accommodating light-gauge cables and long cable runs. Internal energy storage circuits for the MM-4XP minimize the system's peak-to-average current demands, ensuring efficient use of the MPS Power Supply's 48 V DC output.