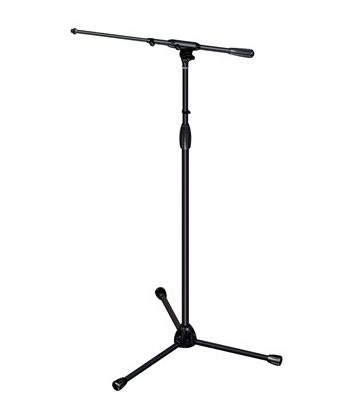 The Tour Series mic stands from Ultimate Support are the perfect solution for the professional tour company, high-end venue, and serious musician. With oversized, heavy-walled steel tubing and a black chrome finish, they are the strongest, most durable mic stand built for the road. They also feature a modular design so you can choose any of the six bases to combine with any of the shaft heights for the perfect mic stand depending on your needs from night to night. Finally, all Tour Series mic stands are 100% completely field serviceable, so you can replace parts if they fail, instead of the entire microphone stand. Tour Series mic stands set a new standard for anything your next tour can throw at them.

Any Tour Series base (three tripod, three weighted) fits any Tour Series shaft (short, standard, and tall) so you'll always be prepared for whatever the next show demands. And the Tour Series bases feature super aggressive threads combined with a wedge lock that allows for a much faster setup and take down, and less chance of the shaft unthreading from the base during performances.

Featuring a hard chrome protective finish (5x more durable than the finish found on stadium bleachers, for example), Tour Series mic stands will not chip, rust, or show wear - period. But, they're also finished in black, the color of choice for blending into the background of your show on stage!

The patented Quarter-Turn Clutch on the Tour Series microphones is a super smooth design that locks and unlocks with only a quarter turn of the clutch handle. It's an over-molded clutch that delivers a secure grip that locks up faster and smoother than any other clutch on the market.

Whether you're performing in the States or over seas, a Tour Series microphone stand is the only stand you'll need. The top threads fit both US- and metric-threaded mic clips and accessories for use all around the world.

All Tour Series microphone stands can be field serviced with replacement parts as needed over their VERY long lifespan (from the foot caps all the way up to the mic adapter). So, rather than throwing away a mic stand when a part breaks, with a Tour Series mic stand you can simply replace the part and move on to the next gig!

The new Ulti-Boom telescoping mic boom features an oversized
"rotation hub" ? the place on a boom where everything comes
together. Ultimate Support's center hub is the largest on the
market, increasing friction, and reducing any chance of slipping.
Adjust it once and forget about it! And, the Ulti-Boom features a true metal counter-weight that provides true balance on the boom.