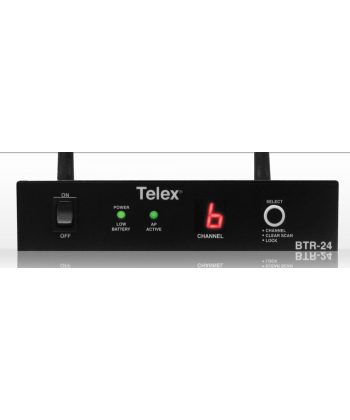 The BTR-24 system incorporates the option of three audio channels that are selectable at each TR-24 beltpack. Upon start-up the BTR-24 base station automatically scans and selects the bestRF (radio frequency) channel for communication with a feature called ClearScan. The BTR-24 also has a built-in lithium ion battery pack that will provide up to 10 hours of uninterrupted operation or can be operated with the included wall mount AC power supply. The BTR-24 also includes rack mount hardware.

• Supports up to Ten Beltpacks