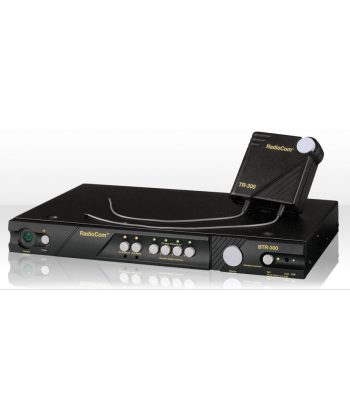 The Telex RadioCom model BTR-300 was specifically designed to provide the user with a highly flexible wireless two-way communication system with the capability to interface with a wired intercom system and other auxiliary audio. At the BTR-300 operators command, the remotes may communicate with each other, with a wired intercom system or with an auxiliary system. The BTR-300 base station with its one transmit and four receive channels is designed to operate in full-duplex (simultaneous two-way communications) with up to four TR-300 beltpack transceivers. The system operates on selected frequencies within the 150-216 MHz band. The BTR-300 system is fully compatible with a number of other wired intercom manufacturers units. As many as four TR-300 beltpack transceivers can operate in a fully duplex network with one Telex RadioCom model BTR300 base station.